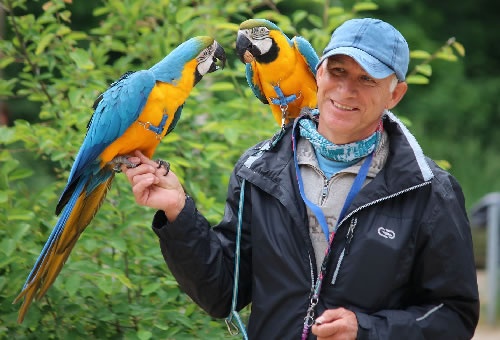 A hunter shot a rare parrot dead while it was out being exercised because ‘it’s not illegal to shoot exotic birds’. Owner Joseph Verdyck was helpless as he watched his beloved pet being blasted in the sky before falling down and getting eaten by hunting dogs. Joseph, from Westmalle in Belgium, had taken pets Rambo and Mera, who he raised after hatching them from eggs, and even taught them to fly, out to a field. Owner Joseph Verdyck took Rambo out for a fly when he was shot dead Joseph was however unaware that hunters were in the area, and within minutes, one of them took aim at Rambo and blasted him from the sky. He then saw to his horror how the hunting dogs, owned by the men, immediately ran towards the parrot and savaged the poor bird in front of his eyes. A shocked Joseph immediately confronted the hunter who shot his beloved pet animal. Joseph said: ‘He apologised because he did not know it was my bird and said that he would have never done it if he had realised the owner was nearby, and that it was not an escaped animal.’ The hunter said that he saw the bird flying over in the sky and decided to shoot it as hunting exotic bird species is allowed in Belgium. The hunter told him he did it because it’s not illegal to shoot exotic birds He promised Joseph he would contact his insurance company to see if the pet owner can be reimbursed. He said that Rambo ‘was not a child’ but still an ‘enormously loyal animal’ as he said he is still suffering emotionally from the loss of his beloved bird. 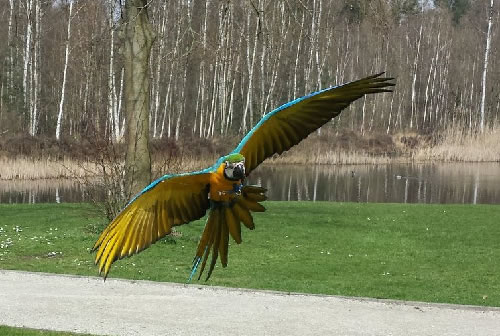 Joseph has filed a criminal complaint against the hunter. He said: ‘The man just shot for fun at Rambo. A hunter hunts for game: rabbits, pigeons and pheasant. Not a brightly-coloured parrot which clearly was wearing a red harness. That is a pet, you just don’t shoot it.’ He got permission from a farmer to let the ara macaws, worth several thousand pounds each, fly over one of his fields. Joseph had raised Rambo after hatching him from an egg Joseph said: ‘Rambo became a fully fledged free flight bird after three years. According to experts he was one of the best trained parrots in Belgium. ‘He is often allowed together with Mero to fly free for the day, in the summer a bit longer than in winter.’ The news of the shot parrot clearly hit a nerve in Belgium as the tale hit all the newspapers and caused sympathisers of Rambo to launch a petition to the government, demanding a full judicial investigation along with clear and transparent hunting laws. Petition initiator Jimmy Morel said: ‘Rambo and one of my parrots named Macho were fly buddies. Macho learned a lot from Rambo. They flew at least twice a week together, then they feel a lot safer. I hope the petition will make a change.’ Joseph added: ‘I got replies as far away as America and Australia. Rambo was quite known in these circles.’